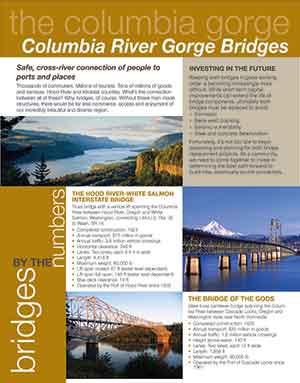 Safe, cross-river connection of people to ports and places

Thousands of commuters. Millions of tourists. Tens of millions of goods
and services. Hood River and Klickitat counties. What’s the connection
between all of these? Why, bridges, of course. Without these man-made
structures, there would be far less commerce, access and enjoyment of
our incredibly beautiful and diverse region.

INVESTING IN THE FUTURE

Keeping both bridges in good working
order is becoming increasingly more
difcult. While short-term capital
improvements can extend the life of
bridge components, ultimately both
bridges must be replaced to avoid:

Fortunately, it’s not too late to begin
assessing and planning for both bridge
replacement projects. As a community,
we need to come together to invest in
determining the best path forward to
build new, seismically sound connectors.

Truss bridge with a vertical lift spanning the Columbia 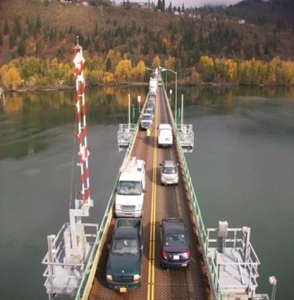 THE BRIDGE OF THE GODS

Bridge of the Gods

The bridges of the Columbia River Gorge are not “nice-to-have” optional connectors. Both are essential transportation links that connect a shared workforce, and provide much-needed access to retail and public services. 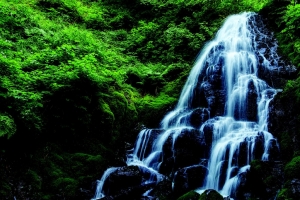 Every generation has experienced the power and possibilities of the Gorge’s bridges. Since the 1920s, the Hood River- White Salmon Interstate Bridge and the Bridge of the Gods in Cascade Locks have enabled countless journeys and untold commerce. They have been essential to economic vitality and quality of life in the region.

Throughout their lifetime, both bridges have been well maintained, keeping them safe and functional well into their eighth, going on ninth, decade.  Neither bridge, however, can continue to safely keep pace with modern-day transport needs and increasing demands. Neither bridge can maintain structural capacity indenitely.

Skamania County Board of Commissioners Meeting

Klickitat County Board of Commissioners Meeting

Wasco County Board of Commissioners Meeting

Sign up so we can keep you abreast of important issues in The Gorge.
Skip to toolbar